Kangaroo Island Sealink bus picked us up at the Hotel Grand Chancellor at 6:15 am. The bus ride was a scenic tour of the hills and farmland along the coast to Cape Jarvis. Here we connected with the Sealink ferry for a 45-minute cruise to Kangaroo Island, where we met up with Richard, our Seal Bay Discovery Tour guide.

Kangaroo Island is the third largest island off of the Australian mainland (55 km by 155 km (or 37 miles by 90 miles) with 540 km of coastline). It was separated from the mainland about 10,000 years ago due to the rise of the sea level. From the spectacular, rugged coastline to the eucalyptus covered woodland, Kangaroo Island is an ideal place to see wildlife in its natural habitat. It was uninhabited when discovered by English explorer, Matthew Flinders, in 1802. Approximately 1/3 of the island still has native vegetation; the majority is conserved in National and Conservation Parks.

One third of Kangaroo Island has never been cleared of natural vegetation and the thick eucalyptus scrub is the habitat of many species of wildlife, much of which is uncommon or extinct on the mainland. In December 2007, there was a bushfire on Kangaroo Island. The rate of regrowth depends on the amount of moisture in the ground when the fire occurs. If the fire had occurred in March (when its dry) less regrowth would have occurred by now.

The black and white birds are called Magpie.   We passed Pennington Bay, on the way to our first stop.

Our tour started at the Emu Ridge Eucalyptus Oil Distillery which operates self sufficiently by solar and wind power; there’s no running water at the distillery.   Here we learned about the traditional distilling process to extract eucalyptus oil from the leaves.

Eucalyptus oil is produced naturally from the Kangaroo Island Narrow-Leaf Mallee which is the dense multi-stemmed tree growing along the sides of the road. Eucalyptus oil is used as a disinfectant, insect repellent, soothes bites and stings, decongestant, stain remover, cleaner, penetrating oil.

I purchased some eucalyptus oil, plus emu oil, eucalyptus soap and lip balm.

From Emu Ridge, we went to the Vivonne Bay Eco Adventures Bistro & Function center. I think this is where we met a recently rescued kangaroo.

We had lunch (beef sausage/chicken, salads, mixed fruit & cream) in the natural bushland at Vivonne Bay with:

After lunch, we attended a Free Flight Presentation of Australia Birds of Prey. Dave Irvin provided informative and entertaining commentary while eagles, falcons and owls demonstrated their natural skills and hunting techniques. He introduced us to KZ Kestrel, Copper Owl, Kookaburra (very territorial feathered javalon; if it gets in another kookaburra’s territory; they will kill it). And, we learned that eagles can live 40 years and mate for life.

At Seal Bay, a conservation parks interpretive officer, took us down to the beach where we were able to see Australian Sealions close-up, swimming in the surf and basking on the sand.

There are about 13,000 Australian Sealions left worldwide (3,000 in Western Australia; 10,000 in Southern Australia). Approximately ten percent are killed by lobster fisherman every year. Australian Sealions and New Zealand Fur Seals are eared seals. They have short fur, short flippers, and a bulky body. They use their flippers to propel through the water and to walk on land. As bottom feeders, eared seals take advantage of continental shelving; they have a limited time (approximately 12 minutes) to get down, get food, and get back up for air. They fish by themselves; there is no rest and no looking out for sharks. They spend about 3 days out for food and 3 days back for rest. Unlike earless seals, Australian Sealions do NOT mate for life; the big boys, reaching up to 270 kg (600 pounds), visit other beaches. With delayed implantation, meaning a fertilized egg will remain dormant for some time before implanting and resuming development to ensure the pup will be born in summer when chances of survival are highest, a female Australian Sealion has one pup every 17.6 months.

“You know what time it is now?” asked Lexie. 3:00. “Photo with a Koala time”. At Parndana Wildlife Park we walked among kangaroos and wallabies. The Wildlife Park is a refuge for orphaned or injured koalas, possums, and other native animals. 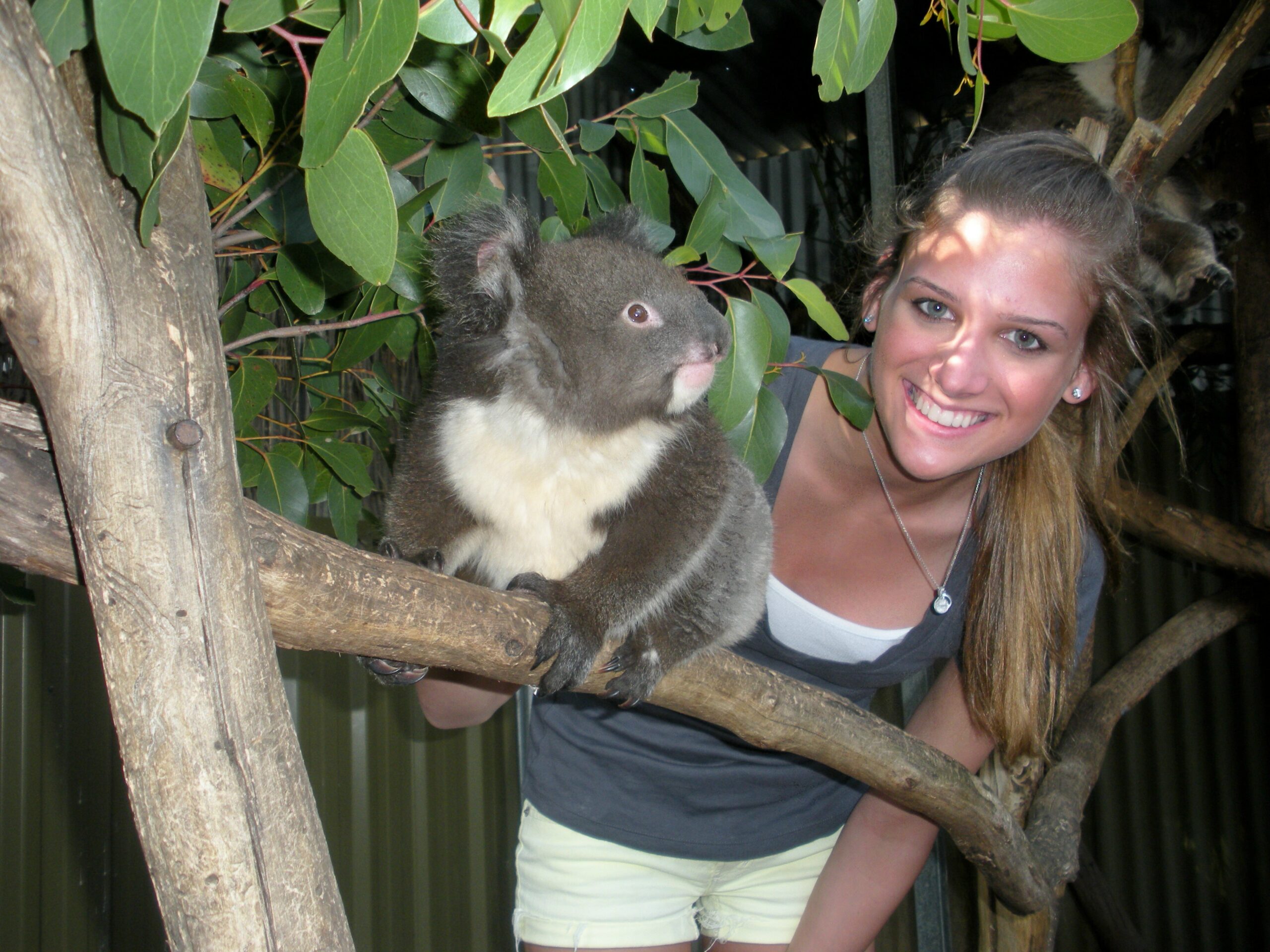 Afterwards, Richard pointed out gum trees, a type of eucalyptus, along the Cygnet River, the longest river on Kangaroo Island, before dropping us off at the Aurora Ozone Hotel on the foreshore at Kingscote.

The Aurora Ozone Hotel was built in 1907. The ornate hotel was completely destroyed by fire in 1919. It was rebuilt in 1920. Additional renovations occurred since then, with the most recent in 2009. Photos of the hotel’s history are displayed in the bistro area.

About half of the 4,000 people who live on Kangaroo Island are residents of Kingscote. The first official settler arrived on Reeves Point in four ships from England in July, 1836. Historically, there is controversy over the first official settler to step ashore. Samuel Stephens claimed he was. However, Captain Morgan arranged for a sailor to carry, Elizabeth Beare, the 2 year old daughter of the ship’s deputy manager and place her feet on shore while the adults were at dinner.

We wandered around town, looking at the shops and grabbed dinner. As I’ve done for the last several days, I asked Lexie if she’s figured out yet what my spirit animal is. You may recall, Marcia’s is the emu, and Lexie’s is the wiener dog. Lexie revealed, though, that her alternate spirit animal is the shark. Since she and I look similar, she thinks my spirit animal may be a shark, too. Remember that if I ever bite your head off! We did our best shark faces.

At 8:30 pm, we took the two-minute walk from the Aurora Ozone Hotel to the jetty for an 8:45 guided tour of the Fairy Penguins. These little penguins, an endangered species, supposedly live all along the shore of Kingscote. Chicks stay in the burrow during the day, while the adult penguins go to sea and feed, coming ashore at night to feed their chicks and rest. The guide pointed out the stars of the Southern Cross. He told us that the styrofoam-looking meat on the beach is cuttlefish and that female cuttlefish die after mating once. He led us along a rocky path and shined a red light among the rocks and burrows, excitedly exclaiming when he saw a little penguin. That happened about 10 times. I didn’t see a single little penguin; I only saw a red light.