We landed in Sydney on time (7:45 am) TWO DAYS AFTER WE LEFT the U.S. Wait! What happed to Friday?

Lexie was the only one of the three of us – in her slumber – who checked YES to carrying food into the country. So, Marcia and I dumped all of our food into Lexie’s bag and made her carry it through Customs.

It took about an hour to get through Customs. A customs official discovered that Lexie’s VISA showed her birthdate as 1981 instead of 1991, so she had to go off with the official to get that corrected. Upon noticing Lexie’s VISA taped inside her passport, the official gave her a lecture to take back to the travel agent and tell her to “never, never, never, put anything sticky in the passport”. Neither Lexie nor I let on that it wasn’t the travel agent who taped the VISA there – it was me. And good thing I did, or where would I be now? Still stuck in Los Angeles looking for my lost VISA and trying to get to my vacation of a lifetime!

It took Lexie about 15 minutes more to get through Customs than it took me and Marcia because she had all that food. Marcia and I just answered a few questions, “Do you have beef jerkey?” NO. “Do you have any food from the flight?” NO. “OK, just head out those doors.” Of course, we didn’t follow instructions and instead of heading straight out the doors, we waited for Lexie. And, then we got chewed out for blocking the path of exiting travelers and got herded out the doors.

Eventually, we all met up. We got out of Customs and we met our driver with the red sun and yellow kangaroo sign by the blue wall. He was kind of irritated. “What took you so long?” he asked. “Your flight landed and hour and a half ago. These other people [two couples] have been waiting a half hour.” “I don’t know,” I responded. “That’s just how long it took us to get through Customs.” He gave us some instructions – which we couldn’t understand. So, he repeated the instructions to a man in our group. Then, he told us to follow the man. We did what we were told. Five minutes later the driver appeared with a van. He dropped one couple off at a ship in a port before delivering us to our hotel – The Menzies Sydney at 14 Carrington Street.

Sydney is Australia’s largest city and the capital of the state of New South Wales. Captain James Cook landed at Botany Bay in 1770 and claimed the east coast of Australia for Great Britain. English convicts, soldiers, administrators, and their families were transported to Sydney from 1788 – 1840, contributing to the city’s interesting history. Gold was discovered in New South Wales around 1850, leading to a population boom in Sydney. The gold rush also ended the transportation of prisoners from England – of course, now, they wanted to be sent to Australia! Sydney’s population reached one million in 1925. In 2010, the population of Sydney is about 4 million people. Aborigines have been in this area for approximately 450,000 years, but only 1/3 of Sydney’s population was born in Australia.  In 2020, there are about 5 million people living in Sydney.

Check in time was 2:00, so our room was not ready when we got there. We left our bags with the porter and got directions to the Circular Quay from the concierge. We walked through Rock’s Market on George Street to get to the Circular Quay. There were interesting wares to look at, but I didn’t want to stop and shop the first hours of our 18 day trip.

The Rocks is an area of the city that was originally inhabited by the English prisoners and is historically known as the rough side of town.

The Rocks seems to be kind of a hipster area now. My understanding is that SYDNEYSIDERS are not eager to acknowledge or promote the convict history of the city. 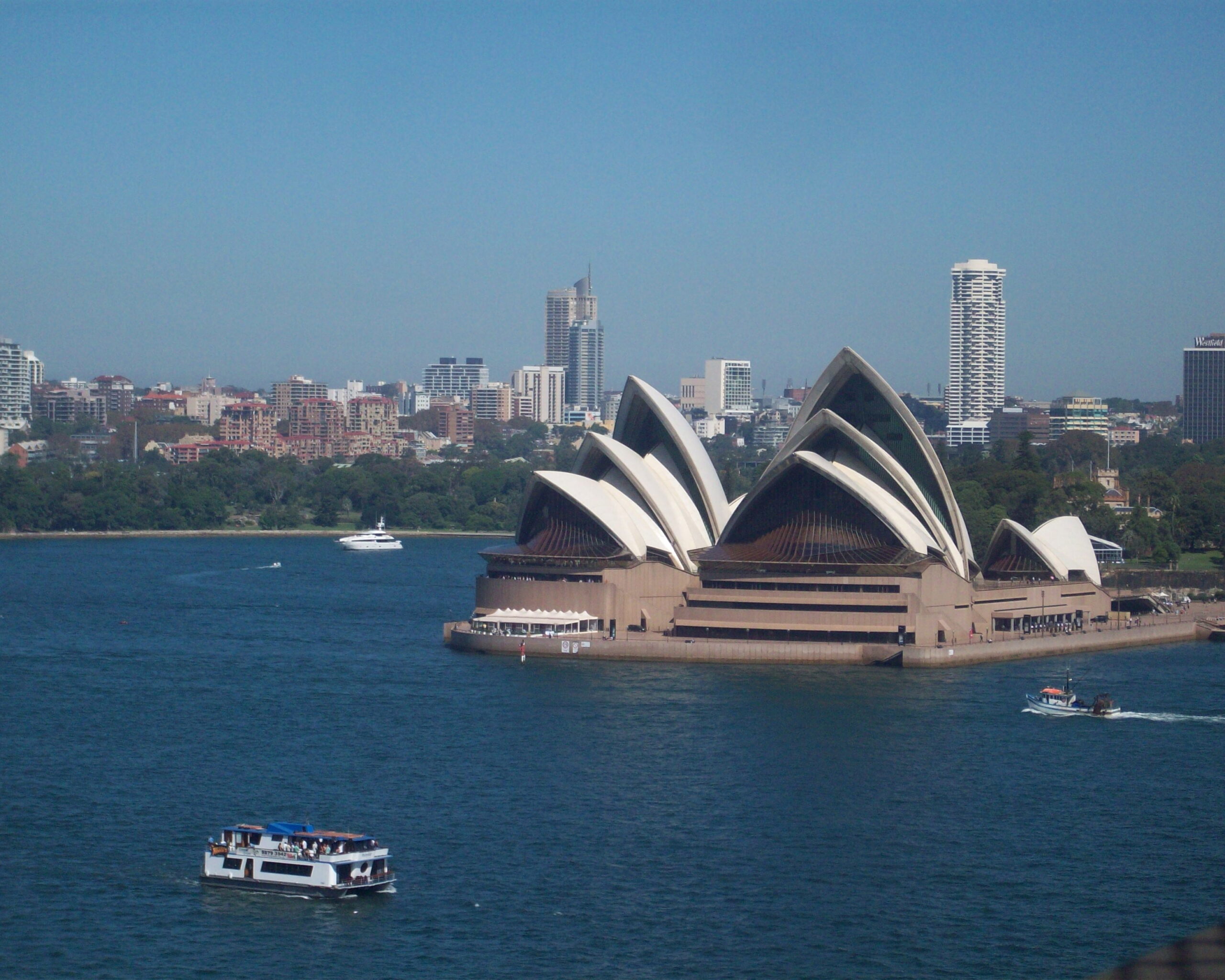 Back outside, we looked at various boat tours to take and talked about going to the Taronga Zoo or Mauly Beach. In the end, we decided to grab some lunch, go to the hotel and freshen up, then come back and do the Bridge Climb or catch a boat to the Taronga Zoo.

We ate at a Café on George Street that had a patio in back. I had my first Australian MEAT PIE.

We got back to the hotel around 1:00 (still an hour prior to the standard 2:00 pm check-in time). Luckily, they had a room ready for us.

While I was checking in, Lexie and Marcia collected our bags and asked the concierge, Peter, about the Bridge Climb. Peter recommended that rather than spending $200 for the Bridge Climb, we spend $10 to do the Pylon Lookout and decide after that if we really want to do the 3 – 4 hour Bridge Climb. He said personally he’d spend the money for a flight to Melbourne and see the view from an airplane – the cost would be less. He directed us to get to the bridge via the train from the Railway Station directly across from the hotel.

On the way to our room, Lexie noticed a Bondi Beach lifeguard t-shirt for $22 in the hotel gift shop, and Marcia saw a cute Australia zip-up sweatshirt for $30. It was still too early to think about buying anything to stuff into our overpacked bags.

We made it to Room 535. There were only 2 towels in the room. Lexie showered first, while Marcia called the front desk for more towels. I showered next. The towels still hadn’t arrived by the time Marcia took to the shower, so I sent Lexie down to the front desk to get some. She came back with one towel, 2 washcloths and a hand towel. At least, Marcia was able to dry off.

Later, when Marcia got out her converter, I cautiously tried my hot air curling rod with it. It worked OK. Lexie was also able to user her flat iron.

About a half hour after Marcia got out of the shower, a giggly lady came to the door delivering towels. Evidently, she was the same woman who gave the towels to Lexie earlier. Two minutes later, somebody else came to the door with more towels!

Clean and refreshed, we were off! We headed back downstairs and across the street to the Railway Station. The train dropped us right before the Sydney Harbour Bridge – or the COAT HANGER, as locals refer to it. We disembarked. According to Peter’s directions, we were supposed to turn left and head towards the bakery. Well, once you go down a flight of steps (he forgot to tell us about that part), there are two exits (on opposite ends). We went one way. When we got outside, the bridge was to our right, so we headed in that direction. We never did see the bakery. We walked across the bridge, passing the first set of pylons. When we got to the second set of pylons, we were able to take stairs up and buy a $10 Pylon Lookout ticket to go the remainder of the way up. There were interesting plaques along the 200 stair climb that provided information about the history and the construction of the bridge, which was opened in 1932.

There were a couple of balconies that we went outside on to and saw various views of the city. Awesome! It was so picturesque and just right for us – especially for Lexie who doesn’t really care for bridges.

We walked back down the tower and over the remainder of the bridge and proceeded to Circular Quay. We were going to purchase a harbor cruise. There were so many to choose from. Our brains were still kind of mushy from 24 hours of travel. After much discussion we finally agreed on a cruise to the Tarango Zoo (the zoo was NOT on my short list of things to do in Sydney). But, then we realized it was already 4:15 and the zoo closes at 5:00 daily. More brainmush discussion. We decided to head to the Paddy Market in Chinatown. Somewhere during the day, somebody told us we could hop on a free green 555 bus to Chinatown. So, we did that. There was nothing too interesting about Paddy Market, and we were like zombies. We started walking back.

We stopped at JET, a sidewalk bar/café on York Street and ordered a few snacks and beverages.  Marcia and Lexie went to the bathroom while we were waiting for food and drinks. Evidently, there was some problem with the bathroom door, but I didn’t quite understand it. Lexie burned her tongue on potato wedges. When we were finished, a cute Italian looking waiter explained to us that we had to go inside and tell them our table number to pay our bill. We followed his instructions with no problems. Good, because I was beginning to wonder how three intelligent women hadn’t been able to follow instructions very well up until this point – I’m blaming it on being sleep deprived.

We exited the building and three young women were running down the street. The one in the middle was crying; the two others seemed to be helping her. A young man was running behind them. Just after they passed us, the man pushed the middle woman and she fell down. Several people from the café and street came to help her and restrain the man. Yikes! We continued back to our hotel on foot.

We were all quite exhausted when we got back to the Menzies. I think the lights were out by 8:00 pm.

Refer to the GLOSSARY for words in blue.