Glen, our Discovery Eco Tours guide, picked us up at the Voyages Desert Gardens Hotel at 5:45 am to take us to see the sunrise at Uluru.  Marcia misheard his name and called him Clay for the first half of our tour.

We were served breakfast of cereal, muffin, and juice while we waited for the sun to come up. 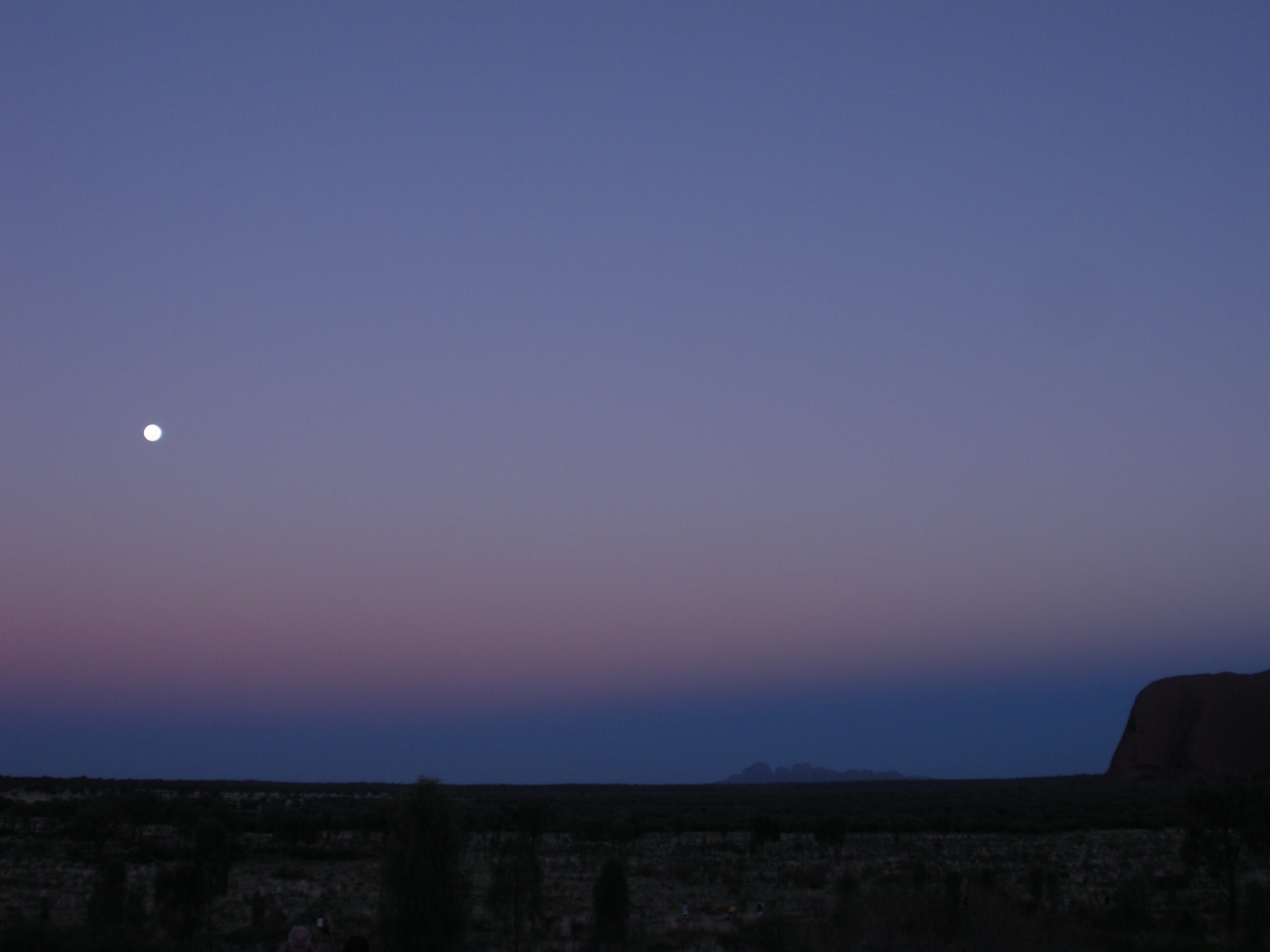 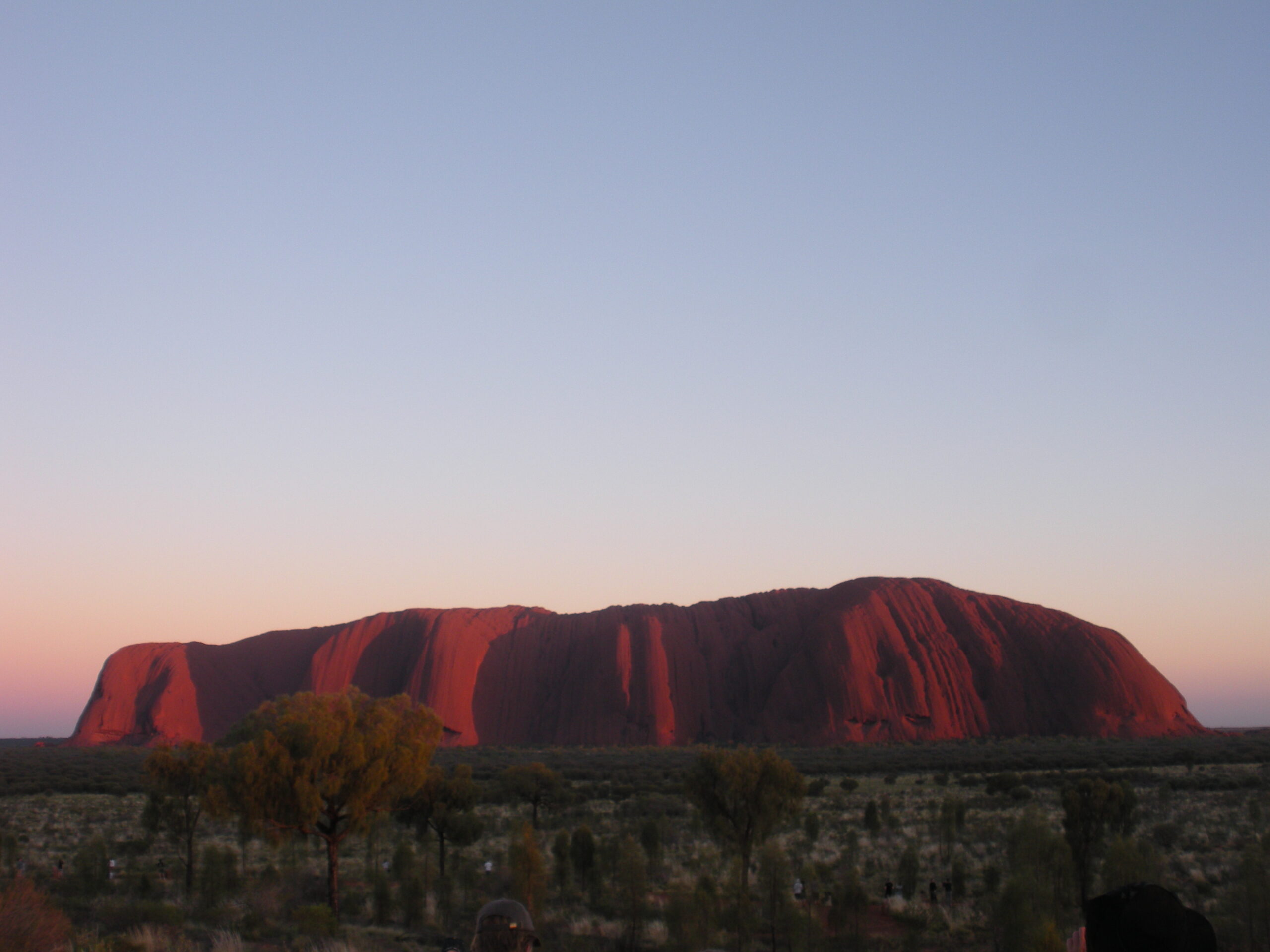 Prior to arriving in Australia, I had heard that although it is discouraged, a lot of people climb Uluru. I wanted to do that! Since our arrival in Australia, other travelers told us that Uluru was sacred and it would be sacrilegious to climb it, but lots of people do it anyway. The Anangu refer to climbers as MINGA.

Glen explained that the Anangu are the traditional owners of Uluru. Their belief is that you are born in your country and you should die in your country. This is the reason the Anangu don’t want people to climb on Uluru. Not because it’s sacred, but because it’s dangerous. They don’t want people to die. They’ll feel sorry and sad if you die. And, your family will feel sad if you die, especially so far away from home.

In 1985, the Anangu people leased the land of Uluru back to government for 99 years. Anangu want tourists to come here and learn about their culture. Lawyers are trying to get the rock closed – not Anangu people.

There is actually a chain to assist climbers. The 19 meters before the chain starts is referred to as CHICKEN ROCK.

People from over 400 countries have visited Uluru. 35 people have died climbing. 140 people died at their hotel after climbing.

Glen pointed out all sorts of flora and fauna, including:

the Desert Oak, which has black bark and is only found in Central Australia. It has thin leaves and roots close to the surface.

the needle sharp clumps of grass called spinifix. The Anangu burn the root to make glue to attach the spearhead to the spear.

mulga trees which are considered the ABORIGINAL HARDWARE STORE because the wood is used for boomerangs, digging sticks, wooden bowls, and firewood, protein in the bark assists blood in clotting, and the seeds are edible.

Glen relayed this Aboriginal dreamtime story while he pointed out specific caves and formations in Uluru:

The Mala men decorated a ceremonial pole, the Ngaltawata. A group of men climbed to the top of Uluru and planted the pole at its highest point, marking the beginning of the ceremony. You can still see the Ngaltawata at the rock’s northwest corner as an almost detached curved pillar of stone.  In the meantime, the women gathered and prepared food for everybody. They stored the Nyuma (seed-cakes) they made in caves at Taputji, a small separate outcrop at Uluru’s northeast side. The Mala women and the Nyuma are visible as small stones on the top of Taputji. Shortly after the Mala men began their ceremony, the Mulga Seed men invited the Mala men to attend their ceremonies. But the Mala men needed to finish the ceremony they started, so they declined. This angered the Mulga Seed men whose elders sent Kurpany (a bad spirit) to wreak havoc on the Mala ceremony. At Initi waterhole, you can see the footprints of Kurpany impressed into the rock, striding towards the east and south. The holes and caverns at Malawati, represent the shallow caves where the Mala men were attacked. 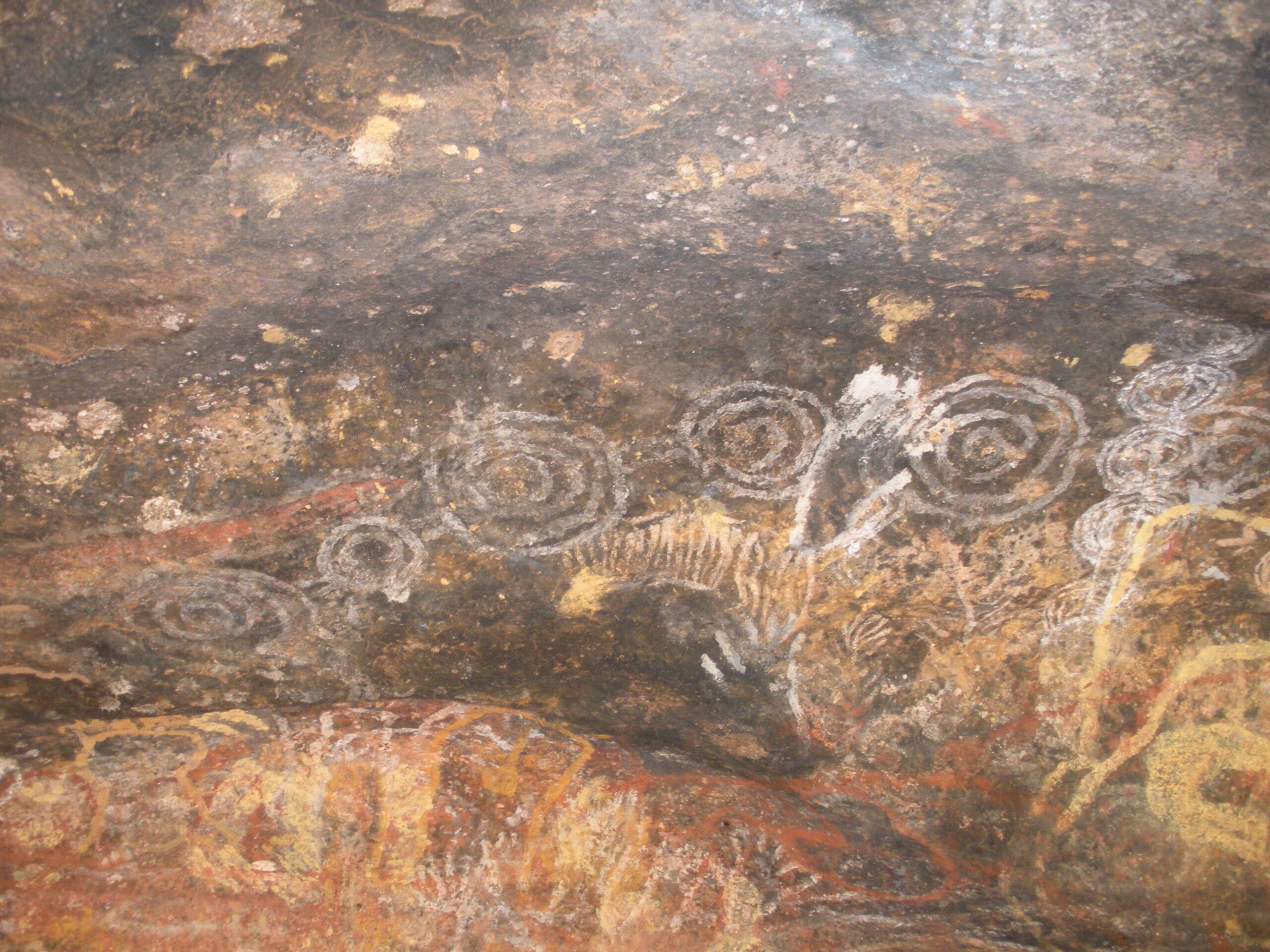 Here are some other things that Glen taught us:

Before heading back to our hotel, we stopped in the Cultural Center and had a little BUSH TUCKER.  We met a rude American lady from Delaware walking around with a video camera complaining that the AUSSIES talk too fast and like they have marbles in their mouth, “Can you understand these guys? They need to open their mouth when they talk.” Her husband never said a word. She complained that she couldn’t understand her tour guide the night before, so she just drank champagne. 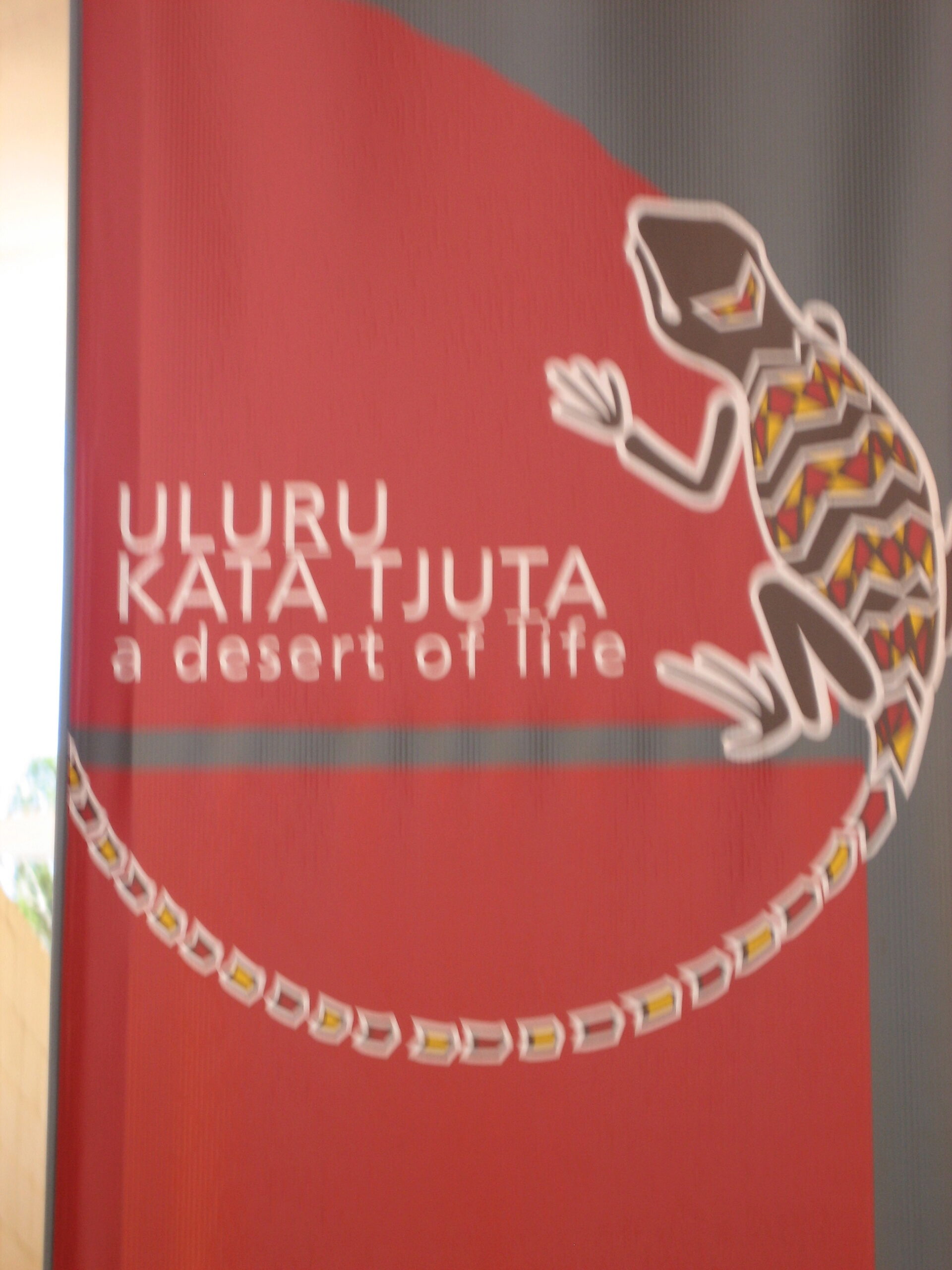 Back at the hotel, we spent some time at the swimming pool.

By 4:00, we were back on a Discovery Ecotours bus for the Kata TJuta and Dunes Afternoon Tour with Busdriver Dave, “SEE HOW WE GO”.

According to Dave, Kata Tjuta (also known as the Olgas) translates to “many heads”. It is a group of 36 domed rock formations. Anangu have lived here 40,000 years. Every feature of Kata Tjuta is explained with a dreamtime legend. The national park is owned and managed by Anangu. The land was handed back to them by the government in 1985. The Anangu count 1, 2, 3,4, 5, Tjuta (anything over 5 is greedy).

Dave confirmed Uluru is special, but not sacred, except certain spots. Kata Tjuta, on the other hand, is one, big sacred site. It’s a Men’s Initiation Site; he mentioned something about 12-13 year old boys who have lost at least one tooth.

Dave told us about the camels that carried messages from Southeastern Australia to Northern Australia. But, the Afghan, who the AUSSIES called GHAN took too long. The government asked the Ghan to build a telegraph line. They built 2,009 km in 2 years from Port Augusta (200 km North of Adelaide) to Port Darwin. In 1872, a submarine telecommunication cable connected the Overland Telegraph Line in Darwin to the rest of the world. The Ghan had worked themselves out of a job. The camels were eventually let go. There were less than 100 camels at the time. Now, Australia has the largest population of Dromedary (1-humped) camels in the world. They can go approximately 11 days without water. They destroy the waterholes, drinking about 110 liters of water in 10 minutes. They are very dirty animals.

Dave also told us about the following explorers:

Burke & Wills were the first ones to reach the North coast, but they died in the outback returning to Melbourne,

John McDouall Stuart was the first to make it to Darwin after 4 attempts from 1858 to 1862,

In 1873-1874, Ernest Giles was the first European explorer to see Kata Tjuta. Mt. Ferdinand, is named in honor of his benefactor, Baron Ferdinand von Mueller, Mt. Olga in honor of Queen Olga of Wurttemberg, and Salt Lake Amadeus is named in honor of King Amadeus of Spain. Giles supposedly discovered Uluru as well, but explorer William Christie Gosse beat him to the claim. Mount Olga, the highest dome, is 1,066m above sea level, 198m higher than Uluru.

We took the 2.6 km Walpa Gorge walk. At Walpa Gorge, the walls and wind are far above. It was a beautiful and enjoyable walk through the immense dome rocks.

After our walk, we drove to the sunset viewing site. We enjoyed a glass of champagne and bread with olive oil and pepper while watching the sun retire over the great red domes of Kata Tjuta.

The national tree/flower is the Wattle Tree. They have bright golden yellow flowers with green leaves, which is the reason Australia wears green and gold in the Olympics.

We heard again that mulga trees are considered the aboriginal hardware store.

Our tour guide estimates there are more flies in Australia than there are stars in the sky.

Six of the world’s top 10 most venomous snakes are found in Australia. See them before they see you!

A dirt road leads to Perth; four-wheel drive and diesel only vehicles are required.

We learned some new Australian words:

Dave told a story of a German man who dropped his passport in the DROP DUNNY. He warned us not to take valuables – such as SUNNIES – in to the DROP DUNNY.

On the drive back to the hotel, Dave pulled over to allow us to take a photo of the BIG orange moon, and – oh, yeah – so he could throw up! He was driving fast. I thought he was going to fall asleep. Did I mention that I’m terrible at taking night time photos?

I did lose my sunglasses that night, but not in the DUNNY – I think when I got out of the bus to take a photo of the moon. Marcia found a pair of sunglasses on Discover Eco Tour Bus, but not mine.

There was an obnoxious, talkative Blonde German woman transplanted in New York on the bus.

We ate dinner at Geckos, the mall restaurant.  After dinner, Lexie had a Magnum with BIKKIE. Marcia had an Almond Magnum. She devoured it so fast, I had to warn her not to eat the stick!

Marcia looks under the covers every night before getting into bed to check for bugs.

Click here to refer to a GLOSSARY for words in blue.