While checking out of the Golden Chain lodge, we asked Rex for his recommendation of things to see and do on our drive to Mt. Gambier. He suggested a rainforest walk in Great Otway National Park, a view of the lighthouse, and a chance to see koalas, He circled the 12 Apostles, London Bridge, and the Loch Ard Gorge on the map. He mentioned that Bay of Islands was his favorite. He indicated that after Portland, the drive to Adelaide is rather boring. He suggested that we might only want to go as far as Portland or Port Fairy today, since there’s a lot to do and see along the way. And add an hour or two of driving to our trip the next day. It was drizzling when we set out. Roadtrip . . . Day 2!

We got about 15 minutes down the road, and we turned off for the rainforest walk. We spent a few minutes getting our rain gear out of our luggage. We noticed the shortest trip was 45 minutes – to see a waterfall would take approximately an hour. We couldn’t determine if that was one-way or round trip. We decided to skip the walk and move on to the lighthouse, which was just a few minutes down the Great Ocean Road. We turned off where the signs pointed. We got about ¾ of the way down the road and we spotted our first koala sleeping in a tree.

Once back in the car, I told Lexie, “Get your camera ready . . . I just have a feeling we’re going to see a kangaroo!” As if on cue, a kangaroo came bounding out of the brush. I stepped on the brakes to let it pass, and just like that it was gone into the brush on the other side of the road. Neither Lexie nor Marcia had enough time to get a photo.

A few minutes later, we arrived at the Cape Otway Light House. The lady at the desk was not overly friendly, but the map was helpful, and there was a lot of information along the self-guided tour. We climbed to the top of the lighthouse and explored the grounds.

For thousands of European and North American immigrants, Cape Otway was their first sight of land after many months at sea. At least 18 ships and hundreds of lives were lost in shipwrecks off Cape Otway, which led to construction of the Lightstation in 1848. The Lightstation sits on a cliff 80 meters above where Bass Strait and the Southern Ocean meet. Eric the Red traveled from America in 1880. His ship struck the Otway Reef in a heavy fog; four people lost their lives. An anchor from the ship is on display at Cape Otway. The head lightkeeper’s house was built in 1857. Today, it is available to rent for an ocean getaway. The assistant lightkeeper’s house was built in 1858 and is currently a café. The grounds of Cape Otway Lightstation are also home to a Telegraph Station which was built in 1859 to house Australia’s first submarine telegraph cable linking Tasmania to the mainland. There’s a weather station on the grounds where the weather is recorded 24 hours a day, 365 days a year, and is reported to the Australian Bureau of Meteorology twice a day. There is also a World War II Radar Bunker on the grounds. The radar station was built in 1942 after a U.S. steamship was sunk by a German mine off the Cape in November 1940.

From Cape Otway, we got back in the car and made our way to see the stunning Twelve Apostles.

The Twelve Apostles are stone pillars that rise straight out of the sea. They were once part of the mainland cliff front. They will eventually disappear due to erosion.

From there, we went on to the Loch Ard Gorge.

The tragic 1878 shipwreck of the Loch Ard ship occurred here. 48 immigrants perished. The only two survivors were Eva Carmichael and Tom Pearce. Tom heard the cries of Eva who was unable to swim. He helped her to the safety of a cave and scaled the steep gorge walls to get help. Eva lost both of her parents and five siblings in the shipwreck. Only four bodies were recovered; they are buried in a small cemetery west of the gorge.

Loch Ard Gorge was my favorite spot on the Great Ocean Road! A short hike down to the beach revealed a beautiful cove surrounded almost 360 degrees by limestone cliffs with a small opening to the Southern Ocean. It was SO beautiful!

I took a photo of Lexie leaning against a large boulder with the opening to the sea in the background. I wanted a similar photo of myself, so Lexie and I switched positions. This is the instant that it was confirmed Kim is not model material – but she’s a much better photographer than Lexie! 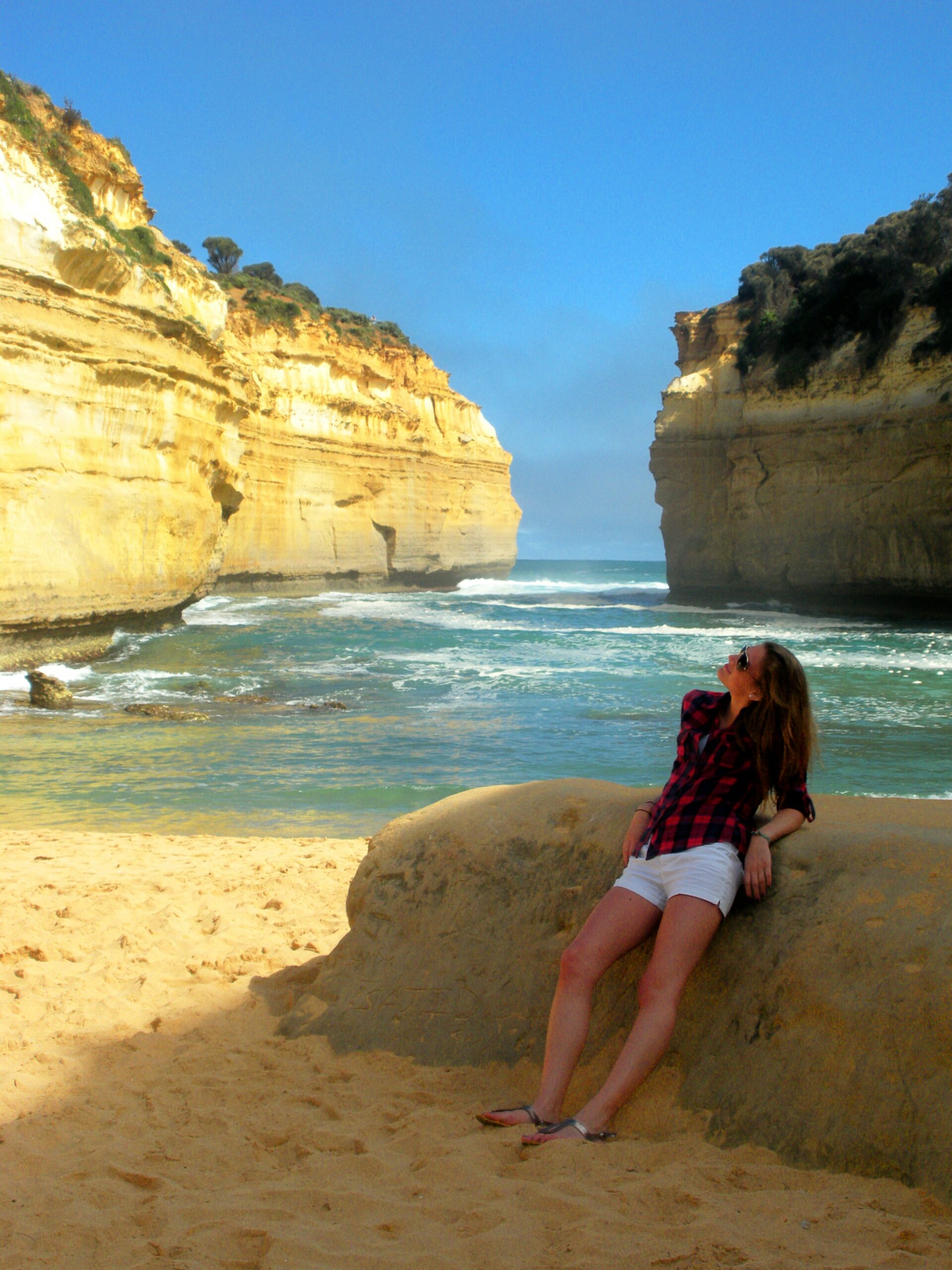 We saw a strange cellophane balloon looking thing (about the size of a grapefruit) on the beach. Marcia poked at it with a stick. I resisted my urge to pick it up and take it home.

We walked back up the trail and proceeded on to The Arch, London Bridge, Castle Cove, and The Grotto. We stopped for a STUBBY in Peterborough before reaching the Bay of Martyrs.

From there, we drove to Port Fairy, a small, pretty, historic village bordered by the ocean on two sides, and found a place to stay. After checking in at Central Motel (part of the Golden Chain), we took a walk through town and down to the wharf.

Port Fairy has less than 4,000 residents, but has 50 historic buildings protected by the National Trust of Australia.In the mid- to late 1880’s, Port Fairy, on “shipwreck coast” was one of the busiest shipping ports in Australia. Over 30 ships have wrecked near the waters of Port Fairy.

We climbed and played among the volcano rock (remains of an ancient lava flow) along the shore.

Ten years later, Lexie’s photography skills have definitely improved; Kim modeling skills have not. Since my 2020 trip to the Florida Keys, I think the cellophane looking thing was either a jellyfish, possibly a BLUEY, or a Man-of-War.