We paid $20 for a two hour late checkout at the hotel.  We sat by the pool in the morning.  Two birds were vying for our attention, making noise, fanning their tails, and staging a cockfight.  We grabbed breakfast at the deli in the shopping center and completed a puzzle in the hotel lobby. 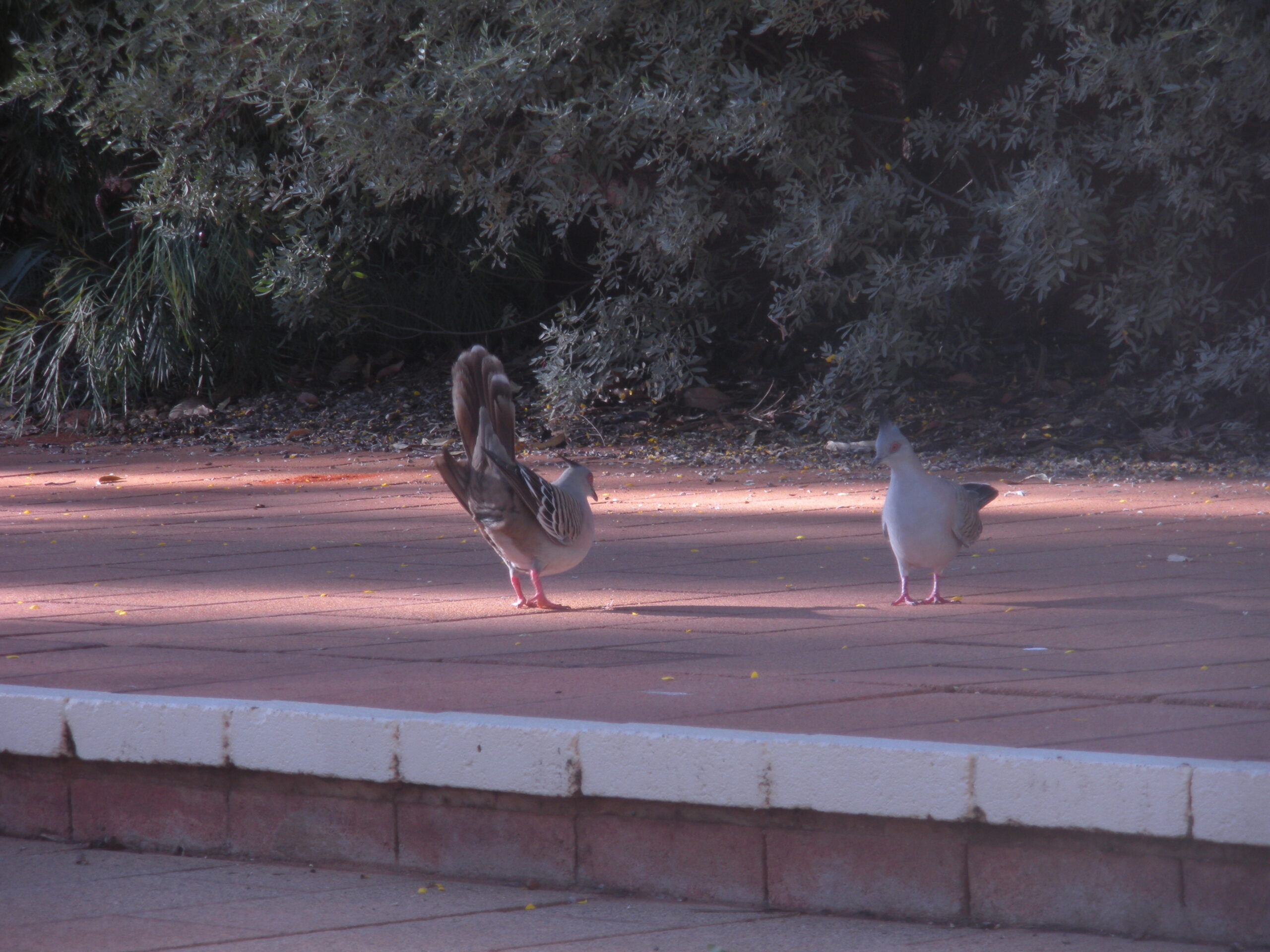 “How’d ya go?” asked the shuttle driver who took us to the airport.

Our 2:30 flight from Ayers Rock to Cairns was delayed 45 minutes. NO WORRIES, we received a free refreshment in the Ayers Rock Airport.

Lexie’s bag got randomly selected for an explosive test. She received many comments about the weight of her backpack: “must workout”, “souveniers”, “shoes”, “you wear this on your back?”

We sat on the tarmac for an extended period. While waiting for the plane to take off, Marcia called AOT Transfer Company to let them know our flight is late. They were aware and didn’t even ask for our name.

On the airplane, we were served pretzel mix and lamb goulash with egg trofie (noodles), carrots & beans, brownie, and Toblerone.

It was raining in Cairns when our plane landed 1 ½ hours late. Our itinerary said AOT Transfers will meet us. None of the transportation companies had our name on a board. I asked an old guy from one of the companies if he was familiar with AOT Transfers. He said there was no such company at this airport; he suggested that AOT must be the name of the travel agency.

Marcia called the AOT number again. They were closed now. The automated message on the phone identified them as AIRPORT CONNECTIONS. I relayed that information to the same old guy; he said that was his company. He asked where we were going. When I said Rydges Esplanade, he informed us that that bus had just left. He called the driver, then told me to follow him. I summoned Lexie and Marcia. He led us to another shuttle. I had to sit in the front seat with him. After dropping people off at a number of different hotels, the old guy pulled up to the Rydges Tradewinds. I asked if that was different than Rydges Esplanade. He said “YES, Rydges Esplanade is up ahead.” He stopped the vehicle and got out. None of the passengers made a move. Eventually, the old guy opened my door and looked at me with an expression that conveyed “get out, Dummy”. I told him that we needed to go to Rydges Esplanade. He said, “you told me you were Tradewinds.” It was raining, and I was afraid if I got too mouthy with the WHACKER, we’d be walking to our hotel. Luckily, I kept my cool, and he dropped us off at the Rydges Esplanade Resort.

The young man at the front desk of Rydges Esplanades was very nice and gave us two free drink vouchers and two free breakfast buffet tickets. I couldn’t understand him, but Lexie told me he recommended Cape Trib over Dain Tree Skyrail.

We had four tapas and two drinks at the bar where Best of Pink videos were playing.  The bartender had two french braids and was a Bon Jovi fan.

Cairns is the heart of the Tropical North Queensland – which is a vast region stretching from reefs and islands – through coastal wetlands – to mountains, tablelands, and grasslands. The northern beaches of Cairns stretch for 25km along a beautiful coastline, with a mountainous rainforest backdrop.

At several points throughout our travel this day, someone could have yelled APRIL FOOLS and the day would have gotten better, but that never happened.

Click here to refer to a GLOSSARY for words in blue.